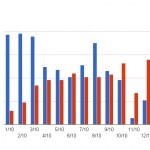 Foreclosure is the word on everybody’s lips nowadays when talking about real estate.  The real estate bust has caused unprecedented numbers of mortgages to go into default.  In Florida, over 18% of all home mortgages are currently 90+ days in default.  The Federal Reserve Bank of Atlanta reported that in September of 2010, almost 8% of the mortgage loans in Bay County were in foreclosure.

The accompanying chart shows the foreclosure trend for single family house in Bay County, Florida, for the year 2010.  The blue line represents the number of foreclosure cases filed at the courthouse each month.  The red line shows the number of foreclosed bank owned properties (called Real Estate Owned by the banks, or REO for short) that were sold to the public each month.   Keep in mind that once a foreclosure action is filed against a house, it can be a while before it becomes REO.  The legal process to get to a public auction can take months.  Then it can be another couple of months before the lender gets the house on the market and gets it sold.  The point is, the process can easily take six months, and a year or more is not uncommon…so you shouldn’t expect the lines to track each other closely.

Notice the huge dip in filings in November.  That was the time when the “robo-signing” scandal hit the news.  In case you don’t remember, a bunch of state’s Attorneys General filed suit against several of the big banks, charging that their foreclosure procedures were sloppy and legally inadequate,  including the charge that they were having low-level employees “robo sign” legal documents without proper review.  The implication was that many foreclosure suits may not have been valid (and therefore be reversible).  The banks put the brakes on collections efforts in an effort to review their procedures…hence the drop in new case filings.

For what it’s worth, 2010 saw fewer filings (1113) than 2009 (1514).  But that may be because of the robo signing slowdown.  I have it on good authority that there is a huge backlog of cases that will be filed in Bay County in 2011.  I would expect that we will have a record number of foreclosures this year.

Hang on tight, the wild ride isn’t over yet!

Types of Houses I Buy and Sell